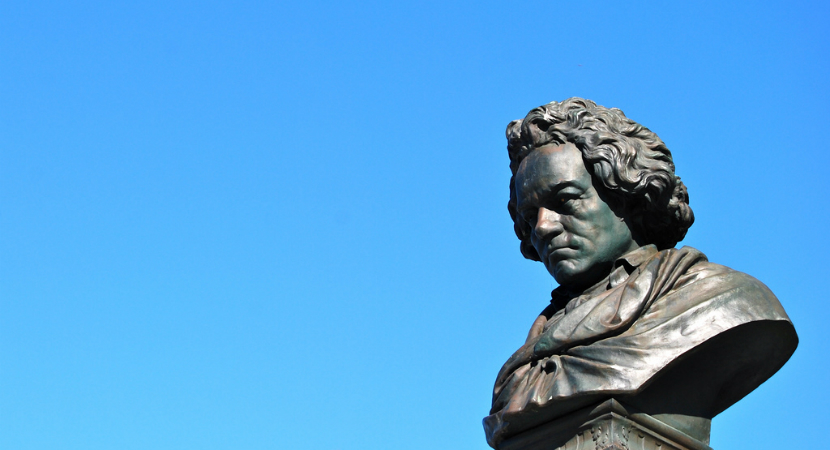 A year ago, I found myself captivated by a friend’s spirited performance of seven Beethoven Bagatelles. I had never imagined that anything written by Beethoven could sound so charming as my friend made the music seem. Yet, in spite of this, I still couldn’t shake an unpleasant childhood memory having to do with the composer.

I could still hear the buzz of the intercom echoing throughout our small Queens apartment, interrupting my Saturday morning television when I was 10 years old.

“Who’s there?” I heard my mother ask through the tinny speaker in the entryway. “Come on up,” she replied, her finger pushing the black button granting entry downstairs. “Elliot,” she called, “Robin, they’re here. The men are on their way up with the piano,” she said to my father and me.

Within minutes, two deliverymen wheeled in a walnut encased vertical piano. “Look, Robin, we were able to get a Steinway,” my mother said. I had a vague recollection of conversations pertaining to the cost of a Steinway versus lesser brands, but I had never asked for nor had I been consulted about learning to play piano. No other member of my family played a musical instrument. Ours was a sports family—my older brothers played baseball, and I yearned to join them, but girls were not yet allowed into Little League. The monthly rental program made a Steinway feasible for my parents. If the piano were eventually to be purchased, the rental payments would then be subtracted from the total cost.

My mother brought forth an ivory colored plastic statue of a man with a threatening gaze.

I held the door open while the deliverymen wheeled the piano in, and watched as they placed it flush against the wall between living room and the narrow kitchen.

As a finishing touch, and what was, I suppose, intended to be a source of inspiration for these pianistic endeavors, my mother brought forth an ivory colored plastic statue of a man with a threatening gaze.

“Here, Robin, look at this, isn’t it wonderful? It’s a bust of Beethoven!”

“Ludwig van Beethoven,” she said, “one of the most famous composers of classical music. A bust means it is a sculpture of the head only.” She placed the unpleasant bust on the top right of the piano.

I sat down and ran my fingers over the keys, and although I liked how smooth they felt, I was not very interested. I just wished Beethoven would stop staring at me so sternly. It must have been his eyes, or lack thereof, that so frightened me. There were no pupils, just carved out lids with indented eye sockets, his long, plastic, wavy hair skimming a high-necked ruffled collar. Unless I kept my head down there was no avoiding him.

I had never heard any classical music in our home. My father loved the songs from jazz singers like Nat King Cole and Peggy Lee and my mother worshiped Frank Sinatra.

Between the humorless teacher and Beethoven’s menacing glare, classical music held zero interest for me.

One afternoon, an elderly woman with wrinkled skin and a black skirt, which fell below her knees, showed up for lessons. This was no replacement for the ball field.

The teacher pulled Thompson’s red beginner book out of her bag and we began. “Every good boy does fine,” she hammered into my head for the treble clef, and “F-A-C-E” for the bass. I learned to read music quickly, but every day after school, when all I wanted to do was roll around the floor with our dog, my mother had to essentially push me towards the piano and the bust.

I endured the lessons a few months longer, making it just past the Thompson classic, “Spinning Song.” Between the humorless teacher and Beethoven’s menacing glare, classical music held zero interest for me. Owing to my refusal to practice and the ensuing battles with my mother, the piano was returned.

The deliverymen removed the piano, but Beethoven endured. He was placed on a living room shelf and served as a constant reminder of how I had disappointed my mother. I was no pianist.

Thirty years later, the bust long gone, the memory of that awful teacher buried in my memory, I decided to take some piano lessons. With several passionate and encouraging teachers, I now find myself, a middle-aged woman, trying to make up for all that lost time. I believe that if I had had a more engaging teacher when I was young, I would have stuck with piano. It would have been a wonderful consolation prize for being excluded from Little League.

And so a few months ago, with my friend’s encouragement, I mustered up the courage to buy the Henle edition of the Complete Beethoven Bagatelles. My teacher selected Number 2 from Opus 119 for me.

The music was loaded with a playful personality, a sound I could never have thought possible with the memory of that awful bust. But now I can’t get enough of it. Like my mother, I still love listening to Sinatra, but perhaps Beethoven wasn’t so frightening after all.

Next on GRAND PIANO PASSION™, Robin Sloane Seibert plays the Beethoven Bagatelle No. 2.