Anna Shelest’s Pictures at an Exhibition: A Personal Journey for this Student of Adult Piano Lessons 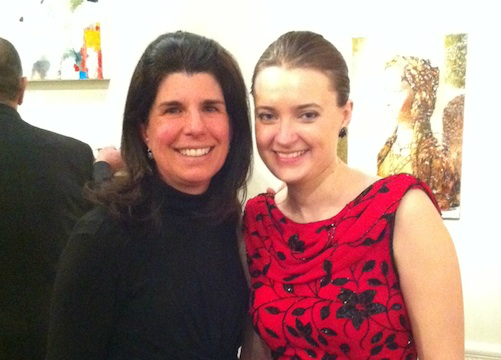 A week ago this past Sunday, inside one of the grand salons of the Ukrainian Institute on Manhattan’s Fifth Avenue, I watched Anna Shelest strike the opening chords to Mussorgsky’s Pictures at an Exhibition. Behind her, in twenty-foot high windows, the sky outside was washed a light blue. The aplomb with which she played the first Promenade—I easily could imagine the composer strolling among his friend’s paintings—hinted at what was to follow: a performance gleaming with technical virtuosity and yet drenched with emotion. Her evocative interpretation caused me to stroll through an internal exhibition of my experiences with the piano.

The recital was to celebrate the release of Anna Shelest’s new CD, entitled Pictures at an Exhibition after the Mussorgksy suite. Although I have seen performances of the orchestral version, apparently Modest Mussorgsky composed the work in 1874 as a virtuosic piano suite in ten movements. Pictures recalls the composer moving through a posthumous exhibition of paintings by his friend Victor Hartmann, who had died the year before of an aneurysm at thirty-nine. Of the ten movements, seven are written in minor keys.

Anna Shelest handled the episodic nature of the work with a seasoned skill. After executing the scampering melody of Tuileries, depicting children at play in the Parisian park, she seamlessly transitioned to Bydlo, meaning ox-cart, in which heavy bass chords swung back and forth, the oxen’s thudding step. Earlier in The Castle, the hypnotic, swaying melody stole away my breath. Although the movement described one of Hartmann’s paintings of a deserted, medieval castle, I saw pallbearers swaying as they carried a heavy coffin to the grave. When Anna Shelest played The Castle’s final chord, it was as though she split the recital hall’s air with intensity.

Perhaps because the specter of death circles about Pictures, while I listened to the music, the burial of my own pianism at age sixteen came to mind. What might have happened had my family circumstances not pressured me to abandon the piano at age sixteen? Instead of allowing twenty-five years to elapse, what if I had enrolled in adult piano lessons after graduating from college? I had no answer to these questions.

In conversations with other adult piano students, I find I am not alone in torturing myself with what-if questions. In an interesting twist, Mussorgsky was an amateur of sorts, an untrained composer. By day, he worked as a military engineer, yet he managed to compose Pictures and the opera Boris Gudunov, the other masterwork for which he is most famous today. His accomplishments with classical piano music despite the lack of training offered hope to me.

Anna Shelest played the grand chords of The Great Gate of Kiev, Picture’s final movement, with a celebratory gusto. Mussorgsky composed this closing movement in homage to a design Hartman had submitted for an entrance gate to the Ukrainian capital that was never built. Anna Shelest’s interpretation was breathtaking, full of orchestral color. The movement’s vitality nudged me not to wallow in questions of the past. At that moment, I had the privilege of listening to this gifted young piansist perform with accomplishment and verve. Behind Anna Shelest, the sky in the long windows darkened to cobalt blue. Her chords cascaded down from the treble like a waterfall, while underneath churned Kiev’s opening motif. The energy of the moment swept me up in its celebration.

Born in Kharkiv, Ukraine, Anna Shelest made her orchestral debut at age twelve with the Kharkiv Symphony Orchestra, playing Rachmaninoff’s Piano Concerto No. 1. As an international recitalist, she has performed throughout North America and Europe. A graduate of Julliard, she is the recipient of numerous awards in international piano competitions, most recently First Prize in the Bradshaw-Buono International Piano Competition in New York in 2009. She currently lives in New York where in addition to preparing her repertoire, she gives piano lessons to both children and adults.

Here is Anna Shelest performing The Lark, her encore performance on during the February 27 recital: