An adult piano student considers her music ugly, a holdover from her childhood. Then when looking to buy an antique Steinway, she instead leaves with hope.

In a one-bedroom apartment of Manhattan’s Morningside Heights, a 1925 antique Steinway grand was the living room’s sole furniture save a small table and two chairs. Perhaps this piano would be the one? I wondered. I asked the owner, Nikolaos Laaris, to play while my husband and I listened.

I hoped Nikolaos might launch into a Beethoven sonata, but instead he played a series of chords and arpeggios. Under his touch, the piano sounded rich. Incapable of making an ugly sound, the music critic from the London Times had declared in a review of Nikloaos I had discovered online a few days before. Owning a concert pianist’s former grand might bring me good luck now that I had returned to adult piano lessons after a 25-year hiatus.

I applauded when Nikolaos finished. “I can see that even with practice music that you are incapable of making an ugly sound.”

Nikolaos threw back his head and laughed. “Would you like to try the piano?”

Perhaps sensing my intimidation at playing in front of a concert pianist, David asked Nikolaos about Greek cuisine. I took advantage of the pair huddling in the small kitchen to sit down on the piano bench. I played Debussy’s Reverie, the melody plaintive.

In the Reverie’s note pairs in the melody, sometimes I heard the two syllables of my first name, as though I were calling out to myself. For years, I had refused to examine the childhood family dynamics that had crescendoed in my losing the piano at 16. Instead, I had told myself that I should not return to the piano because I was not a musical person. Now I had embraced a change of life—my adult piano lessons, my daily practice—yet I still clung to the old belief that my music was ugly.

The laughter in the kitchen broke off. From my peripheral vision, I saw Nikolaos turn around. Feeling constricted, I dropped my hands into my lap.

“Nancy,” he said. “I want to say a very important thing.” He sounded serious, as though he was making a point in a formal lesson. “You have a very sensitive touch on the piano.”

Part of me wanted to jump off the bench with exaltation, while the other part sagged from shame at the attention. I slumped on the piano bench. “I have to work on my technique.”

Nikolaos shrugged, as though to say the need to improve one’s technique was understandable, then gestured to David to join him at the table. I tried to ignore this small audience while I played Chopin’s E-flat Major Nocturne. I had been playing the piano for such a short time as an adult that any audience felt intimidating.

When I a trill on the keyboard, my fingers felt glutinous. “Why does it feel so difficult to do a trill?” I asked.

“It’s the action,” Nikolaos said. “It’s a very stiff one. Maybe you could have a technician loosen it a bit.”

I glanced with regret at the strings running beneath the open lid. A grand such as this that had been owned by a concert pianist would have been like a guardian in my home. Yet to learn a range of technique, I needed a responsive action.

When David and I stepped outside the building, I stuffed my gloves in my coat pocket. The April sunlight shone quietly on my bare hands. Piano hands. I had come to Morningside Heights to find a piano but instead had located a sliver of hope. Maybe there was still time to regain at least part of what I had lost. 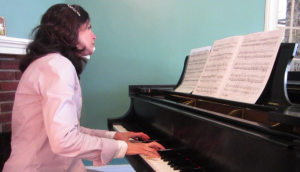 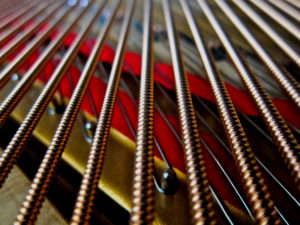