Gain perspectives on interpreting Satie's Gnossienne No. 3, with its flexible sense of rhythm, lack of measure markings, and colorful written indications.

Satie’s Gnossienne No. 3 is charming yet hypnotic, requiring from the pianist a flexible sense of rhythm and a probing creative streak to interpret Satie’s colorful, written indications. In this article, part of GRAND PIANO PASSION™’s well-regarded Classical Piano Music Amplified™ series, I look at the piece from multiple perspectives.

Flexible Rhythmic Sense in the Satie Gnossienne No. 3

Gnossienne No. 3 is written without bar lines or time signatures, a characteristic that is a unique quality of five of Satie’s six Gnossiennes—numbers 1 through 4 and 6—a nod to the fully unmeasured preludes of French Baroque lutenists and harpsichordists, which Satie much admired. However, these Gnossiennes are in fact clearly composed in four-four time. That said, the lack of bar lines and time signatures seems to extend a kind of visual invitation to create a performance that is more rhythmically free than measured.

In Gnossienne No. 3, the wandering melodic contour of the theme—which lies in the right hand—also invites a flexible rhythmic approach in performance. The first half of the theme, “measure” 1, leaps around: A–A, D-sharp–D-sharp, F-sharp–F-sharp. The second half of the theme in “measure” 2 answers the first half’s leaps with a descending melodic motif: E–E, D-sharp–D-sharp, C–C, B–B. Given the distinct contours of the theme and its question and answer character, a rhythmically free performance might look like the following.

The first two A’s are played slightly unevenly with slight hesitation. Then, from the last A to the D-sharps and through the F-sharps, the tempo is sped up, with the left hand, A minor chord at the end of “measure” 1, acting as a solid “backstop” that brings the tempo back down.

Then, in the second half of the theme, “measures” 2–3, one can begin slowly with some hesitation on the E’s and progressively speed up all the way down to the B’s where the left hand E minor chord on beat 2 of “measure” 3 serves as another tempo backstop.

Although Satie takes this basic motif and plays with it in a number of ways, the basic principle of mapping a rhythmically free performance to the melodic contour of the motif, can be used throughout. 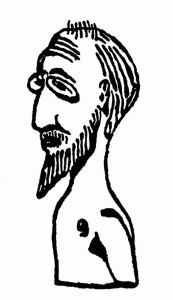 I know of no other composer who wrote instructions in their music that do not indicate any kind of clear, musical action on the part of the performer, such as accelerando or dolce. Indeed, Satie’s use of these instructions—such as “arm yourself with clairvoyance”—seems to be an extension of the music and only obliquely give the performer any kind of actual performance indication. As musicologist Mary E. Davis writes in her biography of Satie: “Prosaically vague yet poetically precise, these directives represent a major and often overlooked musical innovation, as they redraw the relationship between composer and interpreter, requiring performers to grapple with interior complexity rather than simply respond to rote technical language” (Reaktion, 2007).

Of course, there is no way of knowing what Satie actually meant for the performer to do musically with these indications. As such, a large part of the joy of playing the Gnossiennes is making sense of these instructions for oneself. What follows are my own ideas about the meaning of Satie’s indications for the Gnossienne No. 3.

“Measure” 6: Conseillez-vous soigneusement: consider carefully.
This is the second time the second half of the piece’s theme is played, so perhaps Satie is encouraging a careful consideration of how we play it the second time around—quite differently from the first time, I like to think, since to play it the same way as the first time requires no colorful imagination or wit—the very opposite of anything to do with Erik Satie.

“Measure” 11: Munissez-vous de clairvoyance: arm yourself with clairvoyance.
This is the first of many times where the music launches into a cascade of rising and falling eighth notes. In this instant, this cascade figure uses the notes of an E major seventh chord with the E absent and the non-chord tone of A: G-sharp–A–B–A–G-sharp (a non-chord tone is a note that does not occur in the chordal harmony of a particular section or piece). Such a harmony suggests a great deal of uncertainty and mystery, hence Satie’s instructions to arm yourself with clairvoyance—perhaps in order to figure out what’s going on and how to get through it. 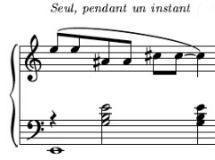 “Measure” 16: Seul, pendant un instant: alone for an instant.
This is a repeat of the first half of the theme, but transposed down a fourth. Perhaps we’re alone for an instant as we simultaneously recognize the theme and yet are initially confused by its differentness given its transposition.

“Measure” 24: De manière à obtenir un creux: so as to form a hollow.
Another cascade of eighth notes up and down in the right hand, but this time using the notes of an E minor triad, with an A-sharp and C-sharp thrown into the mix, indeed creating a rather taut and hollow sound.

“Measure” 30: Très perdu: very lost.
A note-for-note repeat of the section beginning at “measure” 24. Paired with the indication of being very lost, the implication here seems to be musical repetition because of being lost—as in, not knowing what should come next.

“Measure” 35: Portez cela plus loin: carry it further.
Here, the texture of the piece becomes very static—just sustained right hand melody notes and repetition of the same A minor chord in the left hand. Despite the lack of melodic activity Satie seems to be saying, “Keep going, don’t get bored, there’s more to come.” In practice, this means you have to guard against letting your tempo decrease. 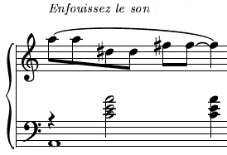 “Measure” 39: Ouvrez la tête: open your head.
Your guess is as good as mine!

“Measure” 50: Enfouissez le son: bury the sound.
The last line of the piece is in fact a repeat of the opening. Satie seems to say “The end is the beginning—a true cycle, there’s nothing new now and so nothing new to show anyone, so let the sound die down.”

Dutch pianist and conductor Reinbert de Leeuw performs an ethereal rendition of the Satie’s Gnossienne No. 3. He chooses a rather ponderous tempo that that moves through the piece as though cutting through dense clouds.

Italian composer and pianist Alessio Nanni gives us a rendition (see video at top of article) with the flexible rhythmic sense that I described earlier in this piece. His tempi ebb and flow in such a way as to create an air of fog and mystery—you’re never quite sure what’s around the next corner.

The Relation of Satie’s Gnossienne No. 3 to the Gnostics

Satie’s Gnossienne No. 3 was composed along with the first two Gnossiennes in 1890, after Satie had been visiting the pavilions at the Paris Exposition Universelle the year before in 1889. The Romanian ensembles Satie heard at the Exposition likely influenced the compositional language he used in the Gnossiennes, with their I, IV, IV chord harmonies. Possibly, the title, Gnossiennes, has a religious origin, again according to Mary E. Davis in her biography of the composer. She notes, “It seems equally plausible, however, that the title relates to Satie’s deepening interest in religion and occultism during this period, and particularly to his fascination with Gnosticism” (Reacktion, 2007). Based on principles of spiritual enlightenment, the Gnostic church sought wisdom through helping others. 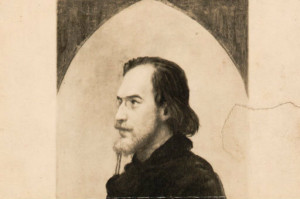