Stephen Malinowski has created an entirely fresh approach for making Bach's music visual. His videos break down contrapuntal voices into a digestible form.

A frog on a lily pad. “Ready to leap” by j / f / photos via Flickr Creative Commons.

What makes the contrapuntal music of Bach difficult for adult piano students? Whether for a Two-Part Invention or a Fugue from The Well-Tempered Clavier, the challenge is to grasp the multiple voices or parts, none of them ascendant, all of them alchemizing to create harmony. Occasionally pianists color code the voices on the score, an attempt to make our centuries-old musical notation system more visual.

Stephen Malinowski, a pianist, composer, and inventor, has created an entirely fresh approach for making Bach’s music visual. His videos from his Music Animation Machine help listeners and piano students alike to see the voices of Bach as a way into hearing them more keenly. On his YouTube channel, also called the Music Animation Machine, among his hundreds of videos, Stephen Malinowski has a playlist devoted to Bach subtitled “The Master.”

To absorb Bach’s counterpoint, however, perhaps the best place to start on the Music Animation Machine channel is not with Bach himself but rather with “Frog Round,” a Baroque-styled round for four voices. Despite that the vocals are synthetically generated, the video is enchanting, with several viewers finding it pleasantly addicting. “I’ve listened to it zillions of times and I still love it,” agrees smalin, Stephen Malinowski’s YouTube alias. Most importantly, the video clearly shows the round’s four voices, the alto a warm orange, the lofty soprano yellow, the companionable tenor a light green, and the hearty bass a deep green:

“Frog Round” imparts a lot of information: the height of each rectangle corresponds to its pitch, the width to each note’s duration, and most importantly, as noted, the color to the voice. By watching “Frog Round,” we can clearly see how the voices are four distinct components that expand and contract, creating a whole more glorious than their parts. When we see the music laid out so intuitively, we can hear it more clearly and intelligently.

Perhaps in part we find the “Frog Round” so accessible because the various voices are human rather than piano parts. With the timbre of the human voice intimately familiar, we are free to concentrate on the interaction of the voices. Listening to “Frog Round,” we slip back to the best of times in elementary school, singing a round like “Three Blind Mice,” while our classmates’ voices swirled around us.

In the FAQ for the YouTube “Frog Round” video, Malinowksi includes a link to his website displaying the text of the Frog Round poem, as well as useful listening exercises, both with and without the score. He leads off by suggesting that for each part, “get it so that you can hear it continuously,” in other words, separate from the rest. His recommendations also include tapping the rhythm of one part while singing another. Immersing ourselves in Frog Round helps us develop the listening skills to play Bach contrapuntal music on the piano.

After that immersion, it’s a quick frog hop, as it were, to the Music Animation Machine Bach playlist, where we encounter videos of Bach violin concertos, cantatas, organ works, and most importantly for piano practice, a sampling of Fugues from The Well-Tempered Clavier. In these videos, the shape and color schemes vary, but the underlying principles are the same, with each voice represented by a different color.

A wonderful example is Stephen Malinowski’s video of the Fugue No. 1 in C Major from The Well-Tempered Clavier (BWV 846). Stephen Malinowski plays the piano while his colored shapes scroll at the top, buttressed by the sheet music on the side. As with so much of Malinowski’s work, the combination of the colorful shapes, the traditional score, and the hands moving to the music, all accompaniments to the sound of the Fugue, permit us to leap towards Bach. 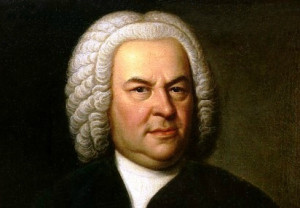 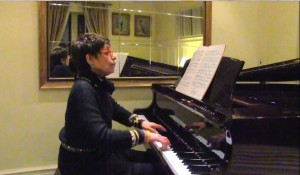