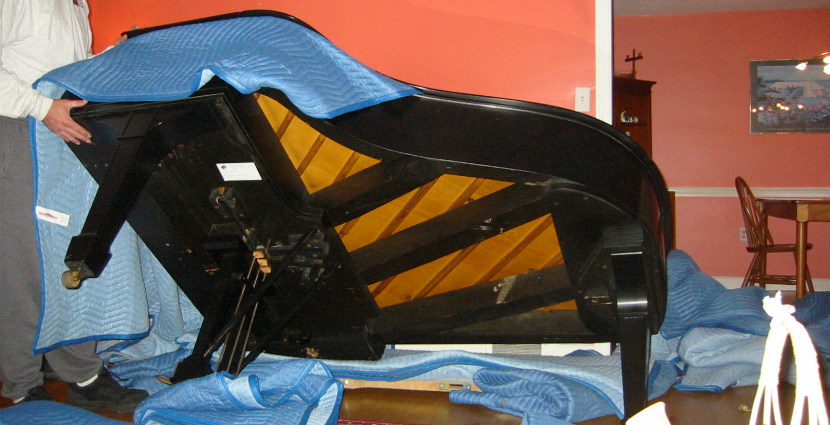 As a shy 12-year-old girl, I never imagined that I’d one day thank my grandfather, Franklyn Mcafee, concert pianist, organist, and music teacher, for my hurting my feelings.

Whether he was playing “Danny Boy” or Sonata Pathetique, Grandpa’s music entranced me. As a young child, I marveled at the way my grandfather’s strong hands flew across the keyboard of his shiny Steinway grand. I wondered why he closed his eyes as he played. Didn’t he need to see the notes? Sometimes my heart hurt just to listen and other times I wanted to dance with joy. 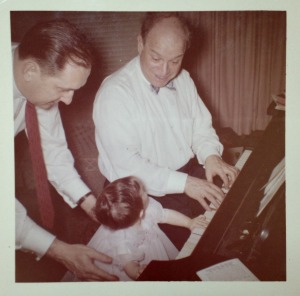 Evelyn as a child with her grandfather.

After I started piano lessons, I complained to Mom about practicing for the obligatory half hour. I was surprised when she told me that Grandpa had made her practice three hours a day. When I complained about playing scales, she told me she had to play them with pennies on the back of her hands.

To me, Grandpa was anything but stern. His practical jokes left my brothers and me in stitches. He showed us his secret stash of jelly beans hidden in the car. “Don’t tell your grandmother,” he’d say as we each scooped a handful. (Nana didn’t approve of candy.)

When I was 12, I mustered enough courage to perform for Grandpa while he and Nana were visiting our home. I chose Romance, the second movement of Beethoven’s Sonatina in G Major, which I’d been working on for several weeks. I was proud that I could usually play it without mistakes. I liked to play it quickly, as if my fingers were dancing.

Grandpa sat down on our living room couch and awaited my performance. When I finished playing, I waited for his applause. He stood up, walked over to the piano and put his hand on my shoulder.

“What needs to pour out of Beethoven’s notes is love.”

“Well, you certainly hit all the right notes. Technically it was pretty good. But you’re really not ready to play that piece, Evelyn.”

Confused, I looked up at him and waited for further explanation.

“What’s missing is the love!” he said.

“See, music isn’t just playing notes on the page. It’s making the notes sing. And what needs to pour out of Beethoven’s notes is love.”

I felt hurt. Couldn’t he see how hard I tried? Grandpa’s stinging words stayed with me.

Six years later, at age 67, Grandpa was dead from kidney failure. I was away at college when I heard the news and unable to attend his funeral. The loss hit me deeply. I had nothing tangible to remember him by, nothing he had especially bought for me, like my friend whose grandfather had given her a gold watch. 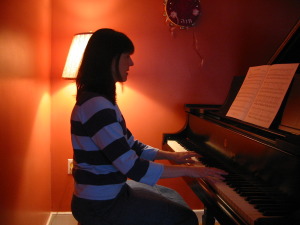 Evelyn at the inherited Steinway grand.

It had been a few years since I stopped taking lessons. Now I felt an urgent need to make sure the musical part of me stayed alive. Luckily, the college music department allowed me to take private lessons as an elective. Every day I locked myself in the tiny practice room, determined to improve my technique. It was just the music and me.

Years later, as a busy mom of three little children, I bought my first piano—a second-hand upright—primarily so my kids could begin lessons. I enjoyed playing songs for my children while they danced and sang along. One of their favorites was the Irish jig which my grandfather had played for me.

One day Mom called me, her voice full of excitement. “Can you clear some space in your living room?” she asked.

“Your uncle is the one who is moving. His new place is too small for Grandpa’s piano. And, as the eldest grandchild, he’s offering it to you first!”

She was talking about Grandpa’s 1928 Steinway grand—the first piano he bought at the start of his career, the piano my mother practiced on as a child, the piano I banged on as a toddler and later watched him play. I was astonished. “But it should be yours, Mom.”

“No, sweetheart, I don’t have room for this in our condo. Besides, I’m sure your grandfather would have wanted you to have it.”

In no time, I sold my upright piano to my daughter’s ballet school, and so began the arrangements for the Steinway’s 700-mile trip from Virginia to Boston.

During the weeks of waiting I shared stories with my kids of their great-grandfather they had never met. I pulled out a box of old photos and showed my kids a young-looking Grandpa in concert. Amazingly, I found a picture of me at age two sitting next to my grandfather at the very piano I was inheriting. I framed this photograph and then anxiously waited to place it on top the Steinway.

Seeing my grandfather’s handwriting on the music brought a lump to my throat.

The day the moving van arrived, my three children and I watched from the front door as the men carried the wrapped piano up our driveway. We all stood around the assembled piano in awe of its grand presence. I opened the bench and was surprised to find a stack of sheet music and books—Beethoven, Bach, Mozart. I flipped through a book of Burgmüller Studies.

“Hey, I used to play these,” I said. “And look! Grandpa’s notes to his student.” Seeing my grandfather’s handwriting on the music brought a lump to my throat. March 12. Play hands separately. Count!

“It’s like he’s talking to us through the music,” my son said.

“Go ahead, Mommy,” my youngest daughter urged, “you try it out.”

I sat down on the bench as if it were made of glass. My fingers lightly brushed the ivory keys. I took a deep breath, and then began to play Beethoven’s Romance. I played it more slowly than I had remembered, to savor the notes. The song sounded beautiful coming from this magnificent instrument. My children listened quietly. I blinked away tears. Grandpa was right. I hadn’t been ready to play this piece at 12. Now I let the music flow through me, for the music, even more than the piano, was his gift to me.

Guest Writer Evelyn Krieger is an educational consultant and freelance writer. Her children’s novel, One Is Not a Lonely Number, was a 2011 Honor Book from the Association of Jewish Libraries. Evelyn’s writing credits include: Writer’s Digest, Lilith Magazine, FamilyFun, Memoirs Ink, Tablet, and Gemini Magazine and others. Her fiction and essays have won several awards. She is the proud mother of three children who have all taken piano lessons and liked to practice.