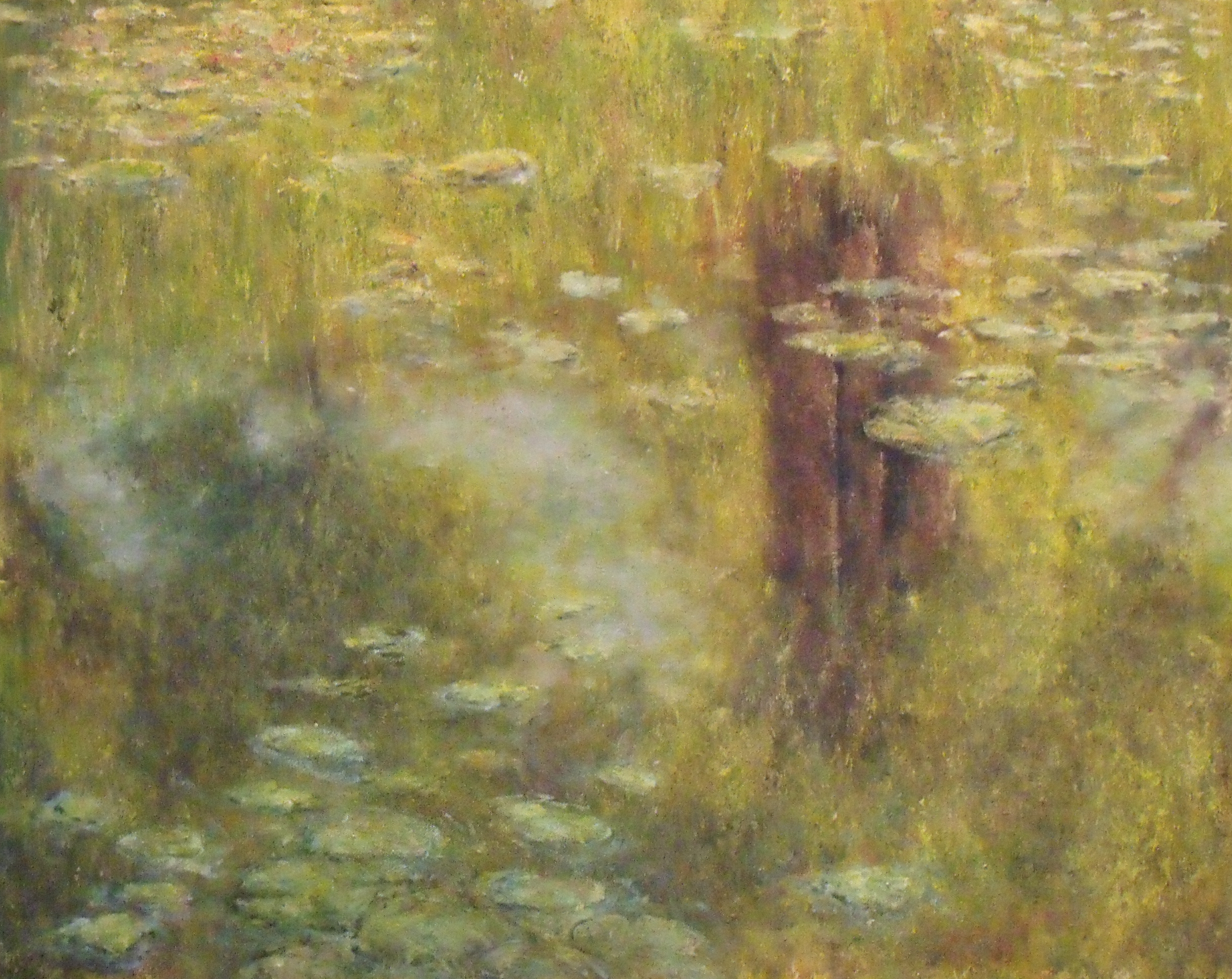 A lily pond in acrylic by Ricker Choi, who recently became an amateur painter as well as an amateur pianist.

If you listened to all of the recordings of the Debussy Clair de Lune available online, you would need at least eight hours. A GRAND PIANO PASSION™ commenter named Arlette did exactly that, and she chose as her favorite a rendition by Ricker Choi because it measured up to her emotional connection with the piece. But Ricker’s ability to hear and play the music so sensitively doesn’t give away one thing: he has a high-frequency hearing loss.

The amateur pianist, who has garnered several prizes at piano competitions and performed a Liszt concerto with full orchestra, sat down to talk with us about how his hearing affects his piano practice and performance, and vice versa. Read on for some of his ingenious tips for musicians who are concerned with their hearing health.

What is it like for you, living with a high-frequency hearing loss?

When there are a lot of people talking in meetings at work, or at a restaurant, I find I have trouble following the conversation. The hearing doctor said I have trouble distinguishing consonants due to high-frequency hearing loss.

The doctor had some earplugs made for me. So whenever I go to a concert or a loud party, I put in the earplugs. Even when I practice, I put on earplugs. And I have a hybrid digital piano, the Yamaha AvantGrand, so I can keep the volume very low. This way, I can practice for two hours without damaging my ears further.

Do the earplugs and low volume change the way you play?

I competed in the Boston Competition for Amateurs, and on stage the piano was very loud, so I used earplugs for the second and third rounds. The piano sounds more muted that way, and I don’t hear the full quality of the sound. It’s not the best, but sometimes I need it.

Before, I would just distinguish sound based on whether it was loud or soft. Now that I practice with the volume down, I need to focus on the sound quality. When I play or perform, I can have my ear tune into the refined spectrum of the sound quality. I can understand the quality of pianissimo.

When did you first realize you had a hearing loss?

I first noticed it six years ago. A bunch of friends were playing a high-pitched sound on a smartphone, and everyone said, turn that down, that’s too loud, but I couldn’t hear anything. I didn’t pay much attention at the time.

But for the six years I practiced at a music school, it was just four walls with no furniture to absorb the sound. The sound was very rich and big, and I loved it, without realizing that it was too loud for my ears. And that’s when I started to have trouble with my left ear. When there were loud sounds, I heard a bubbling sound. The distortion got worse and worse. When the train came, making a loud squealing sound, I used my finger to block the sound.

I think my hearing loss is partly genetic as well, and I remember when I was 13, my brother could hear from the second floor that the basement television was on. I thought he was lying. I realize now that I had started to lose my hearing.

Do you have any tips for musicians who want to get in the necessary practice time without damaging their hearing?

I have been more careful with practicing, making sure I don’t practice for too long. So now I do maybe an hour, an hour and a half, five days a weeks at the piano, and I try to be more efficient in my practicing.

When I prepare for a concert, that week I will carry the score and read it very slowly while riding the bus or streetcar. I close my eyes, I imagine in my mind the fingers and the keys. I try to start in any measure of the piece. When I perform, I feel I need this intense preparation to make sure my memory is foolproof, and once I started to do this, I realized I didn’t need to practice as much.

Ricker Choi is a full-time financial risk consultant. He won second prize at the 2010 Berlin International Amateur Piano Competition, where he performed with the Berlin Sibelius Orchestra in the Berlin Philharmonic’s 2,500-seat Großer Saal. In 2006, Ricker founded Music Heals!, a series of fundraising concerts for charity organizations such as SickKids Foundation.